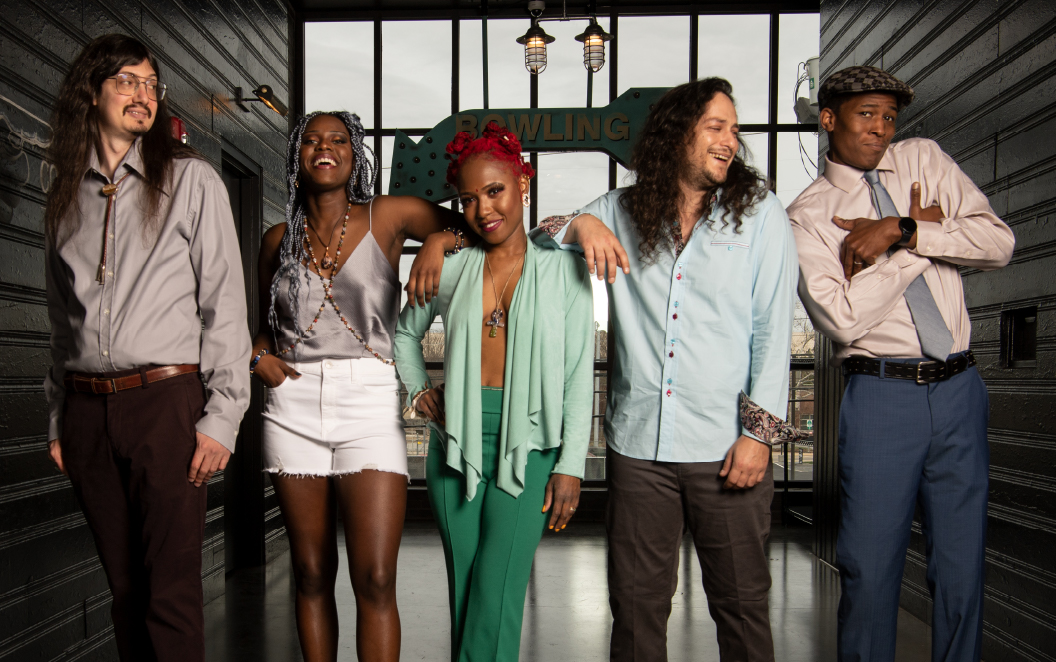 BE THE LOVE YOU WANT, produced by multi-GRAMMY® winner, Steve Berlin (Los Lobos, Deer Tick, Susan Tedeschi, Jackie Greene), and co-produced by Ori Naftaly showcases an exhilarating, and deeply emotional collection of songs that captures all of the shared experiences that bring us together – joy and sorrow, unity and separation, love and hate. “On the last record, we had something to prove,” Tierinii says. “And the GRAMMY® nomination made it feel like we got the job done. We’re grateful for the moment, but we do this for the love of music and for the freedom of our spirit and hope that it frees other people from whatever they’re going through.”

“We’re definitely a melting pot of different experiences, different backgrounds and different cultures. It's hard to put us in a box, both literally, and musically. Southern Avenue doesn’t sound like anybody else. And that's something that I'm very proud of.”

The Memphis, TN-based band’s third studio recording sees Southern Avenue pushing themselves towards bold new ideas of what it means to be a blues band in the modern world, bending and reshaping their musical heritage with electrifying performance, vivid production, and a remarkably clear vision. Operating from their distinctively international vantage point, Southern Avenue has produced a wide-ranging collection of original music – predominantly co-written by Israeli-born guitarist Ori Naftaly and powerhouse lead vocalist Tierinii Jackson – that links them to their home city’s glorious past while at the same time, demonstrates their ambitious intent to evolve Memphis music to contemporary effect. Songs like the sensual, sun-dappled “Love You Nice And Slow” and incendiary title track evince striking new musical range, more than a match for the astonishing gravitational force of Jackson’s widescreen vocals and equally potent lyrical voice. With BE THE LOVE YOU WANT, Southern Avenue continue driving the Southern soul legacy into the 21st century, preserving its glory and tradition while striving towards something diverse, universal, and altogether their own.

“Southern soul is the foundation for so many different styles,” Tierinii says. “We use those influences, we can just run across the board and explore. It’s good.”

The road to Southern Avenue began when Naftaly – a gifted guitarist with a lifelong passion for American roots music – first arrived in Memphis from his native Israel to compete in the prestigious International Blues Challenge. There Naftaly met Tierinii and her ferociously talented sister, drummer Tikyra “TK” Jackson, both of whom had grown up in the church and were only just beginning to perform secular music. Blown away by the sheer force of their ability and personalities, Naftaly invited Tierinii and TK to join his solo blues combo but soon realized that together they had become something both new and special. Taking a name from the main thoroughfare running due west from East Memphis to 926 East McLemore Avenue – a.k.a. Soulsville, the original headquarters of Stax Records, Southern Avenue swiftly began developing a distinctly contemporary approach towards their own reverent sound. Signed to Stax in 2016, less than a year after their initial formation, the band released their self-titled debut early the next year. SOUTHERN AVENUE was an immediate phenomenon, reaching #1 on iTunes’ “Top Blues Albums” chart before being honored with 2018 Blues Music Award for “Best Emerging Artist Album.” 2019’s KEEP ON proved to be an even greater success, debuting among the top 5 on Billboard’s “Top Blues Albums” chart amidst worldwide critical acclaim, ultimately earning Southern Avenue their first GRAMMY® Award nomination, for “Best Contemporary Blues Album”.

Having spent nearly all of their half-decade lifespan on the road, Southern Avenue began 2020 with plans to celebrate their GRAMMY® nomination in front of audiences around the world. The global pandemic changed all that but allowed the band a rare chance to finally pull back and take a well-deserved pause.

“We kind of needed to sit down and rest,” Tierinii says. “Because we go and we don’t stop. We don’t stop to celebrate and soak in the moment, every time we achieve something great. We just keep going and going and going.”

“We had been going so hard for the last five years,” TK says. “In the beginning, it was like an appreciated break. But after about two weeks, I was definitely feeling the angst, wanting to be able to be in the creative space. But life is made of the good and the bad so we had to find a way to make the best of it.”

With seemingly infinite time on their hands, Southern Avenue were able to approach their third album with more attention than ever before, allowing songs and ideas to flow at an unhurried, natural pace.

Southern Avenue reconvened in November, coming together at the analog-centric Memphis Magnetic Recording Co. for eight full days of recording. As is their nature, Southern Avenue worked hard and fast. After such a long hiatus, the band lit up the recording sessions with enough raw power here to spark a sizable electrical fire.

“We hit it and quit it,” Tierinii says.

“Having Steve there really helped us bring the songs to their full potential,” Naftaly says. “It's about having another set of ears on the music that you trust.”

BE THE LOVE YOU WANT marks an irrefutable enhancement of what has already proven an exceptional canon of material, augmenting the band’s signature sound with myriad layers of guitar tracks, percussion, strings, and brass (courtesy of veteran saxophonist Art Edmaiston and trumpeter Marc Franklin) to create what Naftaly calls “the most Southern Avenue album yet.” Songs like “Control” and the house-quaking album closer, “Move On,” fully came to life during recording, arranged to accentuate the band’s uncanny interplay and exceptional musicianship. “Don't Hesitate (Call Me)” is marked by Naftaly’s chromatic chord changes and psychedelic bridge and while “Heathen Hearts” tacks far from Southern Avenue’s usual full-blooded musical domain, eschewing traditional instrumentation for handclaps, foot stomps, and joyful church choir harmonies.

The ambitious sonic approach expertly counterparts with BE THE LOVE YOU WANT’s rich themes of self-love and self-empowerment, of personal accountability and pushing through towards something greater. Songs like the spectacularly uplifting “Control” offer immediate evidence of Tierinii’s growing muscle as an individualistic, communicative songwriter with a particular knack for affirmative intimacy.

“I’m very proud of where we went lyrically with this album,” Tierinii says. “It’s the way I speak to myself. I talk to myself a lot. It’s a way of overcoming different things, fears, or traumas. I speak very positively to myself, sometimes I’m very hard on myself, sometimes I give myself self-love. Sometimes I’m very accepting of my thoughts. And sometimes I have to comfort myself and not be so hard on myself. I feel like this album reflects the way that I have to speak to myself to make it through life.”

Along with two distinctly groove-powered songs co-written with Tikyra and bassist Evan Sarver (“Let’s Get It Together” and “Pressure”), BE THE LOVE YOU WANT also sees the songwriting core of Southern Avenue teaming up with such friends and fans as North Mississippi Allstars’ Cody Dickinson (“Push Now” and “Heathen Hearts”) and Israeli-born, Los Angeles-based keyboard player/songwriter Itay Shimoni (“Fences”). Perhaps the album’s most surprising collaboration is “Move Into The Light,” a churning, funk-blasted burner co-written with 2X GRAMMY® Award-winning pop superstar Jason Mraz and producer/songwriter/musician Michael Goldwasser (Easy Star All-Stars).

“It’s just such a unique collaboration,” Tierinii says. “Jason understands the vibe of Southern Avenue is very positive, so his approach lyrically perfectly matched the direction for the album. When he turned up with the song, I was so grateful. We reworked it with the band and made it all churchy and soulful and as Memphis-y as we could. It turned out really, really great. It’s kind of a wild card, because it’s more of a dance song, but it’s still got that church vibe, it still has the soul.”

Southern Avenue have showcased that soulful spirit with nearly non-stop touring, their powerful showmanship and locked-in musicality honed through extensive stage experience. The relentlessly traveling band – who have played in over a dozen countries, including show-stealing sets at such festivals as Bonnaroo, Firefly, Electric Forest and Lockn’ – is of course eager to return to the road, keen to introduce fans old and new to their amplified musical vision.